A new book focusing on the previously untold stories of passengers lost aboard the P&O liner SS Persia, tragically sunk by a German U-Boat during WWI, is being launched at Buckler’s Hard.

Historians and descendants of crew and passengers involved in the maritime disaster have been invited to the historic shipbuilding village’s Maritime Museum on 23rd September, to launch The Ambush of SS Persia; Voices from a Lost Liner. Mary Montagu-Scott will give a speech about the tragedy which saw 343 lives lost, but which her grandfather John 2nd Baron Montagu survived.

Meticulously researched and written by Alan Wren, who was inspired to put pen to paper after a visit to the SS Persia display at the Buckler’s Hard Maritime Museum, the book reveals the stories of those aboard the SS Persia when it was torpedoed without warning on 30th December 1915, sinking within minutes. Included are tales of lovers, villains, heroes and heroines, young children and a huge fortune lost. The book pays tribute to those aboard who never made it home.

Author Alan Wren, who lives locally to Buckler’s Hard, said: “I could never have dreamed of launching my book at Buckler’s Hard, where the idea for the book started in 2015. After five years of research and rewriting, then Covid hold-ups, the launch is now imminent. In the early days, a wise publisher told me that while writing books is difficult, selling them is where the work really starts.

“Thanks to the efforts of many people at Beaulieu and Buckler’s Hard, the book launch will be not only an opportunity to gain valuable publicity, but also to meet some extraordinary people, many of them descendants of those on board the SS Persia. Without their enthusiastic contributions, there would not be a book launch.”

The sinking is commemorated at Buckler’s Hard with a special display in the Maritime Museum, which includes several artefacts from the ship, recovered during the world’s deepest salvage operation of its type, as well as the door to the ship’s bullion room. Also to be seen is a memorial sundial which was commissioned by the Montagu family to commemorate the 100th anniversary of the sinking. 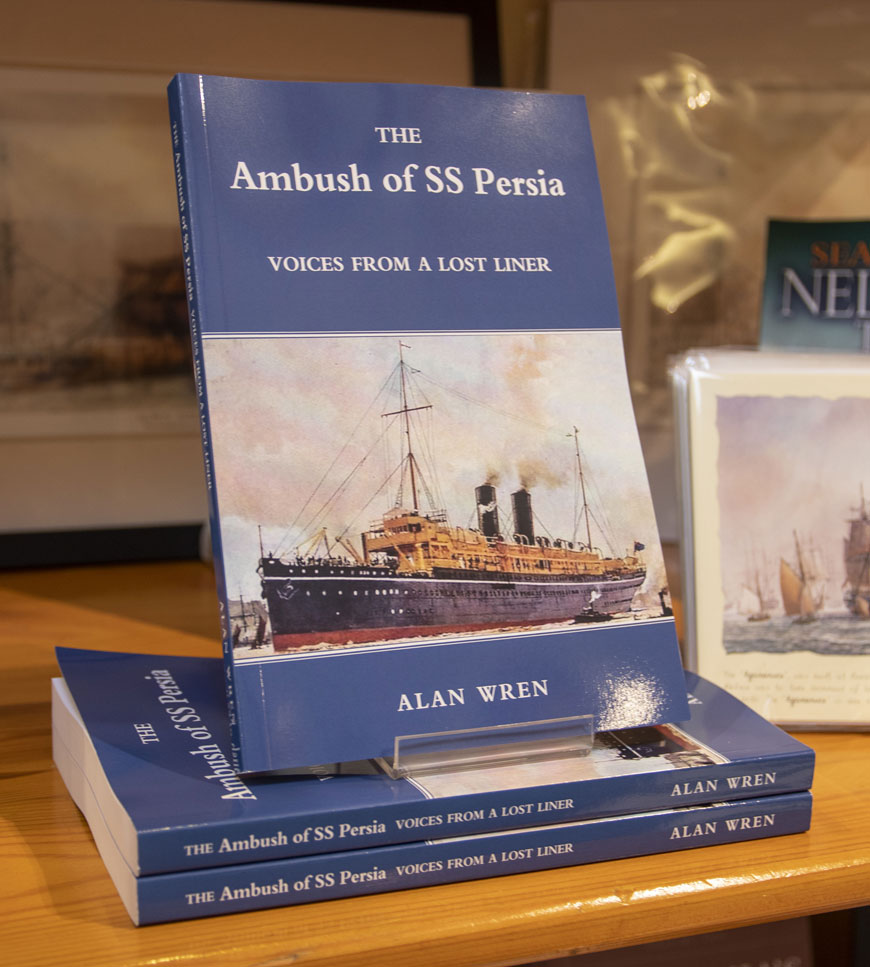 Not only was the SS Persia believed to have been carrying a large quantity of gold and jewels belonging to a Maharaja (including real rubies, amethysts, moonstones and some of the earliest known synthetic rubies) at the time of the sinking, but her human cargo was truly remarkable. John 2nd Baron Montagu was fortunate to be amongst the survivors of the disaster, but his secretary Eleanor Thornton, immortalised as the inspiration for the Rolls-Royce Spirit of Ecstasy mascot, was lost and her body never found.

The Ambush of SS Persia; voices from a lost liner, which costs £12.95, can be purchased from the Buckler’s Hard gift shop, or online from York Publishing. Click here to plan your visit.